Caplan notes that these results are hard to reconcile: The former suggests that labor demand is highly inelastic, whereas the latter suggests it is highly elastic.

It is not uncommon to see two different estimates of elasticity, particularly when looking at how things change from the status quo.  For some goods it has been observed that any increase in price has a low impact on demand – as people adapt their spending and saving to maintain their consumption pattern – while a decrease in price can lead to increased consumption.  For some goods, the opposite effect can be seen – a decrease in price will see consumers spending the saved money on other goods (so there is very inelastic demand downwards), while an increase in price will lead to consumers switching to alternatives (leading to an elastic demand upwards).

Is such a kinked curve evident here?  Initially, it seems that the two opposing views are looking at two different graphs entirely; the first is looking at the movement along the demand curve for unskilled labour, while the second is looking at the supply of unskilled labour (and a shift in the demand curve).  There is no contradiction under this initial reading of the conclusions; this in part is because these are a third-hand retelling of the original papers and miss out a lot of context.

Instead, it is worth thinking of the conclusions written in a different way.

My answer is that in the first case, companies are getting an excess return from their employment of unskilled labour, and therefore an increase in the wage does not prevent them from continuing to employ the same number.  This excess return from employing labour is indicated by a flat, perfectly elastic demand curve (D1) set at the minimum wage.

Companies would like to employ more, but face a lack of supply of willing workers.  This inelastic supply of workers causes unintuitive behaviour from the employers; initially it would seem obvious that they should increase wages to employ more, but doing so would increase wages for all workers and the employer would lose the excess benefit they have obtained.  It may well be that keeping wages at the minimum is the profit-maximising position.

Increasing the minimum wage shifts from D1 to D2, but there remains little increase in the number of people willing to work.  It is this that shows the “inelastic demand” – rather, it is an inelastic supply constraining the ability of employers to take on more workers. 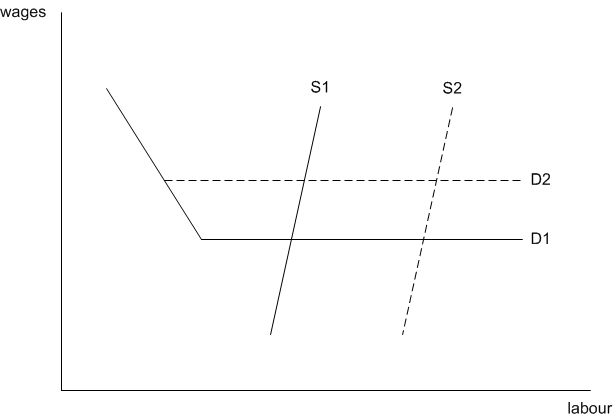 Given this, the second point follows.  Immigration of unskilled labour shifts the supply curve, from S1 to S2, meaning that employment can increase without significant impact on wages.  Employers are able to continue to accrue the excess benefits, and the employment of domestic labour is not affected.

There will be a kinked demand curve – above a certain wage, it will not be profitable to employ the same number of unskilled workers – but this is not at the current position.